I'm sure if you're as obsessed about Jim Henson stuff as me you already know about, and maybe even own, some of the AWESOME new Dark Crystal and Labyrinth Pop Vinyl figures that have just been released by Funko! 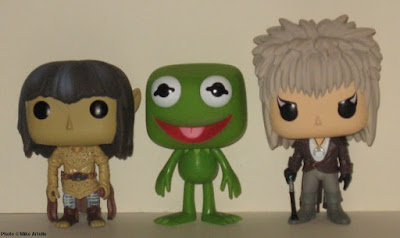 Back in 2012 Funko released their first Henson related series of figures with The Muppets Pop figures and Wacky Wobblers. I picked up the Kermit Pop Vinyl figure (shown above) and somehow managed to resist collecting the other nine figures in the series, instead choosing to collect the Muppets Wacky Wobblers set. Then in 2015 along came Funko's Sesame Street Pop figure series!!! As awesome as they are, especially with Big Bird and Snuffy as 6 inch figures to keep them in scale with the smaller Muppets, I was well behaved and didn't cave in to collect them! Yet, they have kept taunting me just as the Muppets series did, and now in 2016 Funko has hit the nerve of my geeky "all things Henson" obsession with the addition of not one, but TWO, more Henson inspired collections: The Dark Crystal and Labyrinth!!!

You win Funko... and thank you for winning!!!! These new figures are so amazingly detailed, with the costumes recreated exactly like in the movies, how could I possibly pass them up?!?! The Labyrinth set even includes a harder to find Jareth the Goblin King variant with his magical orb! ...and Ludo is a 6 inch figure! Ack! A Ludo action figure!!!! (Sigh!) So now I want them all... all the Muppets and all the Sesame Street gang, and all the new ones!!!  ....Farewell disposable income, farewell!!!! 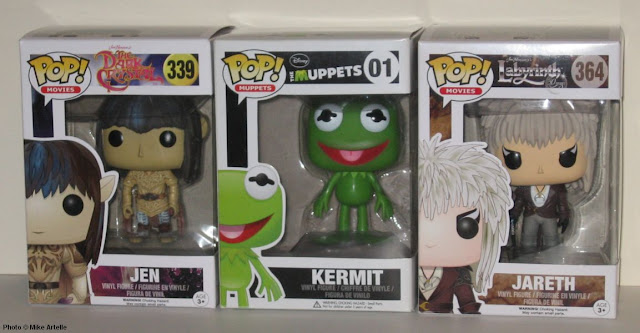 Jen, Kermit, and Jareth Pop figures by Funko in their nifty boxes!

Below I've compiled a list of all the Henson related figures that Funko has made to date, because I want to be as helpful a Muppet freak as can be by passing along my obsession with these collectables to others who, like me, have been trying in vain to resist collecting them. Isn't that nice of me! :) 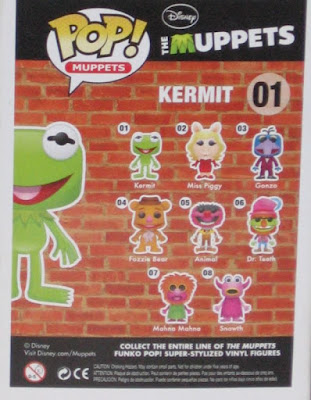 The back of each Funko Pop box shows illustrations of all the figures that are available in a collection. In this case Sam the Eagle and Swedish Chef are not shown on this "The Muppets" box as those figures were not yet available. They're only shown on the back of "Muppets Most Wanted" boxes along with Kermit, Miss Piggy and Animal.

The Muppets: Plushies (I'm not aware if these were actually released or not)
Kermit
Miss Piggy
Animal

The Muppets: Cupcake Keepsakes (I'm not aware if these were actually released or not)
Kermit
Miss Piggy

Here is the complete collection of all the Sesame Funko Pop characters along with Kermit from the Muppets series. Shown above in order that they were released are Kermit the Frog, Super Grover, Cookie Monster, Oscar the Grouch, Bert, Ernie, Snuffleupagus, Count, Elmo, Grover, Big Bird, and Herry Monster. Missing from this photo are the variant figures, including an orange version of Oscar the Grouch and a few flocked versions of some characters.

This is an awesome collection of Sesame figures that I just had to have! It's a fun series and each figure is very well sculpted. I would have preferred the Cookie Monster figure to have been made dark blue to look like the actual Muppet, but as usual with Sesame toys Funko made him light blue. It's so bizarre that Cookie Monster toys are always light blue!!! Big Bird also has a white crest on his head above his eyes but it's never included on toys of the character which is odd. It would be a shrewd bit of marketing on Funko's part to reissue the same Cookie Monster figure in dark blue for die hard Muppet fans like me (Funko that's a little hint!). A limited edition Big Bird with the white crest area coloured in would also be interesting, but if I had to choose I'd rather Funko made a dark blue Cookie Monster figure.

It would also be awesome if Funko continued the series to make more retro Sesame characters as they did with the special edition Herry Monster. In any case, when I was collecting these I left the light blue Cookie Monster figure for last along with Elmo, who I find a tad annoying, but I'm glad to have both of them now as they complete the collection! Below are more pictures of these awesome little Funko Sesame dudes.... which I am a tad obsessed with! :)

Here's a closer look as series 1 of the Sesame Pop figures along with Kermit the Frog from the Muppets Funko Pop series. Below is series 2 along with the recently released Herry Monster. 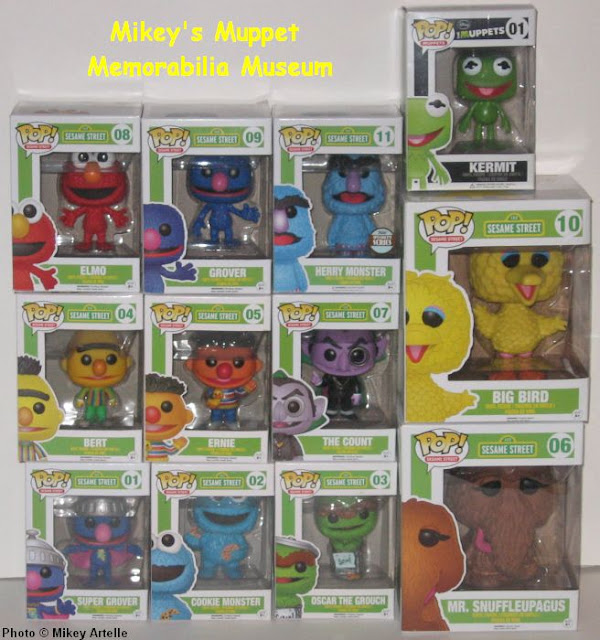 Here is the complete collection of Sesame Street Funko Pop figures in their original boxes. Kermit is also shown in his original Muppets box. It would be neat if Funko re-issued this same Kermit figure in a Sesame Street box to make him officially part of the collection! (That's another little hint Funko!) ;)
Below is a complete list of all the figures and exclusive variations that were also made. All of the variant figures have flocking except for the orange Oscar the Grouch. Personally, I'm not too interested in the flocked figures, but I am hoping to eventually add the orange Oscar to my collection.
*Note: Be careful when buying flocked variants of Sesame characters as I've seen customized, home-made flocked figures online that were not issued by Funko! 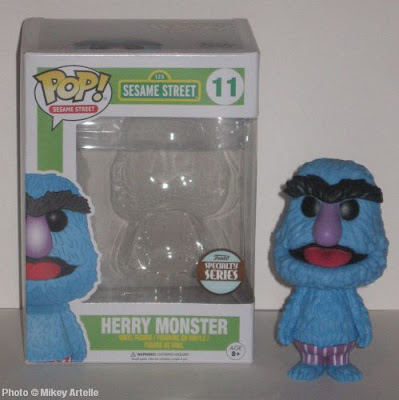 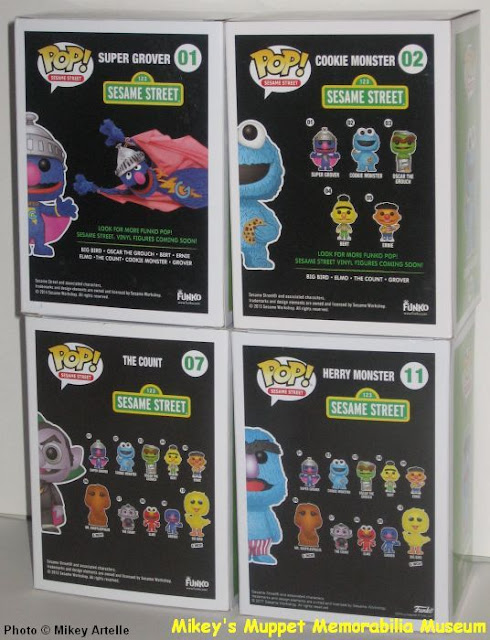 The back of the Sesame Street Pop boxes for figures number 2 to 5 (series 1) show an illustration of the first five figures on the back of the boxes, while figures number 6 to 10 (series 2) have the entire collection on the box. The back of Super Grover's box (number 1) has a photo of the actual Muppet with text listing selected characters from both series as "coming soon". The back of special edition Herry Monster box is the same as the series 2 boxes and does not mention any additional characters as coming soon, which I had hoped to find! My wish list for additional Sesame Funko Pop figures is posted here: http://mikeysmuppetmemorabiliamuseum.blogspot.ca/2017/05/mikeys-wish-list-for-sesame-street.html 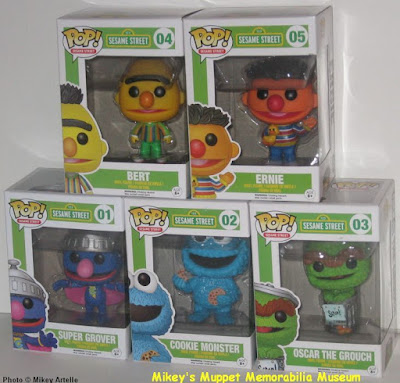 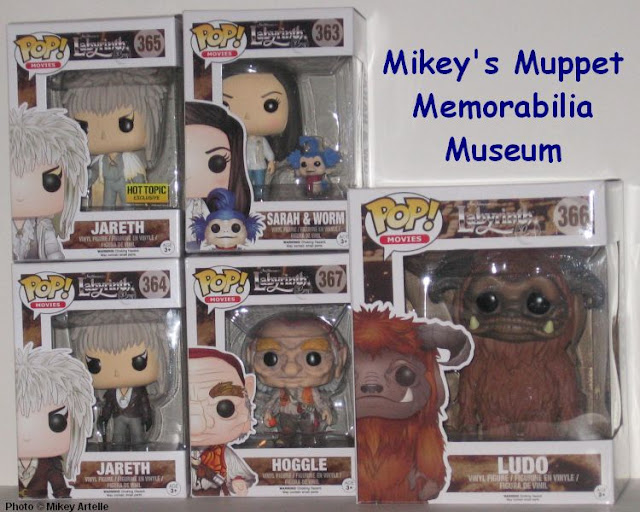 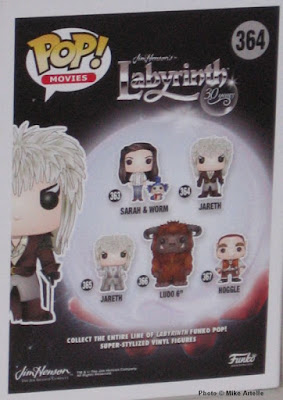 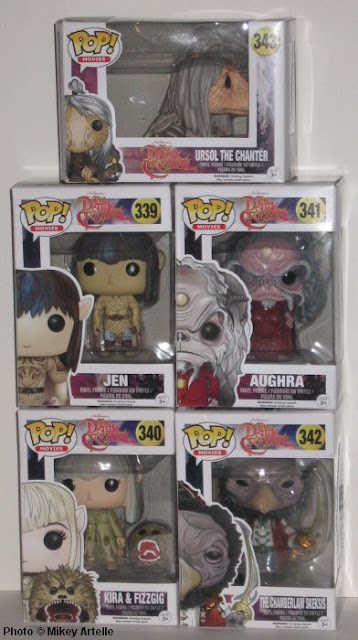 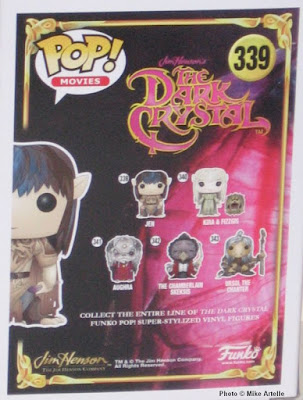 The Dark Crystal Pop figures in their boxes, above, and loose, below. 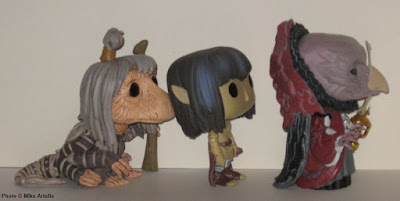 I've included the side and back views to show the amazing attention for detail that Funko has applied to these figures. The costumes are amazing!!! Click on any picture for a larger view. 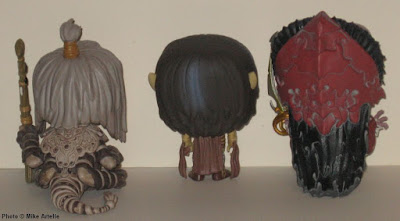 The Dark Crystal: Reaction Figures (to be released Nov 2016)
Each figure comes with a different section of the Dark Crystal...awesomeness!!!

If Funko actually releases all of these awesome action figures then, logically, we'll have to beg them to make a Dark Crystal castle playset in the style of Castle Grayskull, along with some pod people, more Skeksis, and one of those weird light dudes from the end of the movie! Wouldn't that be yummy! :)

And, Oh my goodness, maybe they would - gasp! - do the same for Labyrinth and issue Reaction figures based on those characters too!!! 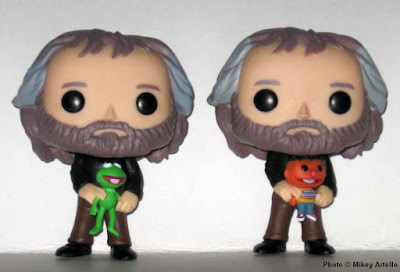 Update: In 2019 Funko released two figures of Jim Henson himself!!! The standard version of the figure shows Henson holding Kermit the Frog, and the variant version has him holding Ernie.

Plus! ...the Swinetrek spaceship added to the Pop Rides series, with a Pop figure of Captain Link Hogthrob.

Plus! ...a limited edition three pack set, special reissue of original figures for Kermit ("The Muppets" series figure #1), Miss Piggy (#2) and Gonzo (#3) in a "The Muppet Show" box

Plus! ...a display stand for the figures styled after the Muppet Show theatre stage with the arches from the opening Muppet Show theme, with space to put a Pop figure in each arch!!! This would complete the collection perfectly and entice collectors to take part in this Muppet Show Pop series!!!

Plus! ...the Electric Mayhem Bus added to the Pop Rides series, with a re-issue of Dr. Teeth (figure #6) from "The Muppets" series.

Plus! ...a special reissue of Dr. Teeth (figure #6) in a single "The Muppet Show" box that includes his keyboard

Plus! ... a special reissue of Animal (figure #5) in a single "The Muppet Show" box that includes his Electric Mayhem drum set!

Series 4
31 Statler
32 Waldorf
33 Uncle Deadly
34 Droop (furry green Muppet monster with long snout), comes with small figure of the Fazoobs trumpeter alien
35 Timmy Monster (blue-green monster), 6 inch figure, comes with two small figures of the Fazoobs drummer and drum aliens
36 Marvin Suggs holding a mallet, with a separate one piece figure of the Muppaphone puff balls lined up in a row on top of a small wall
37 Beauregard with anvil and mop
38 Mildred Huxtetter (pink lady with beak-like face)
39 Behemoth (orange Muppet monster that eats everything) with a small figure of the purple Muppet monster that gets eaten in the "I've got you under my skin" skit
40 Luncheon Counter Monster, with one piece PVC figure of Muppet fruits and vegetables in a group (tomato, potatoes, cauliflower, grapes, lettuce, etc)

Plus! ...a special reissue of Fozzie Bear (figure #4) in a single "The Muppet Show" box

Series 5
41 Lew Zealand
42 Flying Zucchini Brothers, two pack set with cannon (one brother with blue head, black moustache and one with pink head wearing helmet)
43 Crazy Harry
44 George the Janitor, holding mop
45 Doglion, 6 inch figure, with small one piece figure of the Muppet creatures from the "Java" skit standing on a small wall
46 Pops (a Pop figure of Pops!)
47 Wayne and Wanda, three pack set with #18 Gorgon Heap, as seen in the "Some Enchanted Evening" skit
48 Mean Mama (brown dog-like monster)
49 Walter, wearing blue suit (packaged in "The Muppets" Box) with small "Robin sized" figure of Pepe the King Prawn
49 Walter, limited edition variant, wearing sweater with a picture of Kermit's face on it (packaged in "The Muppets" Box) with small figure of Pepe the King Prawn in ballerina outfit
50 Clifford, as he appeared on The Jim Henson Hour with his sunglasses (packaged in "The Muppets" box)

Imagine that! A collection of 50 Muppet Pop figures!!! That would be so cool!!!

Some Fraggle Rock Pop figures would also be awesome! ...each could come with a small Doozer figure, and the set could include a 6 inch Junior Gorg!

Update Nov 2017: Funko announced a series of Fraggle Rock Pop figures will be released during the Winter of 2017/2018! Yayyy!!! And just as I suspected they will each come with a mini Doozer!!! I've updated my wish list below in comparison to the actual figures being released. To see pics of the figures, click this link:
http://mikeysmuppetmemorabiliamuseum.blogspot.ca/2017/11/yayyy-fraggle-rock-pop-figures-coming.html

Plus! ... a small playset of the Doozer village with five more Doozer figures (has not yet been made)

Plus some more Sesame Street figures.... I've posted my wish list for those here: https://mikeysmuppetmemorabiliamuseum.blogspot.ca/2017/05/mikeys-wish-list-for-sesame-street.html
Posted by Mikey Artelle at 9:43 PM