Ever since Funko released their Labyrinth and Dark Crystal Funko Pop collections I've been completely geeking out over Funko's awesome Henson/Muppets related figures. Just this past week I managed to find the Funko Specialty Series Herry Monster figure at Ottawa Comiccon. Herry is the latest addition to this very addictive and fun series of Sesame Street characters! Here he is below, I'm still basking in his tiny "fuzzy and blue" awesomeness... 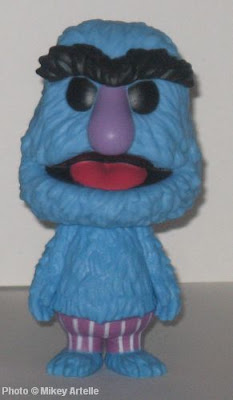 Thank you for making him Funko!!! He's awesome! :)

As I'm hoping that Funko will be making more classic Sesame Street characters I've posted my "wish list" below! There are so many memorable and classic characters to choose from, it seems that at least another five or ten Sesame Street Funko Pop figures isn't too unreasonable to wish for (especially with characters like Frazzle, Guy Smiley and the Two-Headed Monster!). However, I went all out and made a list of 40 more characters!!! Can't help it, I'm a Muppet freak! :)

Below is my Sesame Street Funko Pop wish list. Please feel free to post a comment below sharing which characters would be on your Sesame Funko Pop wish list. If we're lucky, maybe, just maybe, Funko might be convinced to offer Sesame fans more Pop figures! I hope so!!!

Wish List: Series 3
02 Cookie Monster, dark blue variant (reissue of previous figure in dark blue instead of light blue)
11 Frazzle, the orange furry monster with his teeth and tongue sticking out (as seen in "Fuzzy and Blue")
12 Herry Monster, wearing his red and white striped pants Update: This figure was announced on Funko.com Jan 5, 2017 and released in March 2017! Yayyy!!!
13 Guy Smiley
14 Two-Headed Monster
15 Kermit the Frog in reporter outfit (same figure from my "The Muppet Show" series wish list but in a Sesame Street box)
15 Kermit the Frog, released as a variant (reissue same figure from "The Muppets" series but in a Sesame Street box)

Wish List: Series 4
16 Roosevelt Franklin
17 Sherlock Hemlock
18 Biff and Sully the construction workers, two pack set
19 Yip-Yips Aliens, two pack set
20 Grundgetta Grouch, Oscar's girlfriend
10 Big Bird (reissue of previous figure but with the white crest above his eyes painted), comes with his bird nest and his teddy bear Radar (Radar is attached to the next sitting on the edge, and the Big Bird figure can stand inside the next but it would look like he's sitting)

I doubt Funko would ever come close to making all 51 characters, but if you don't ask how can you ever know! :) There's optimism for you! With that in mind I would also add that with so many awesome characters to choose from, I don't think it's too malicious to hope that Funko does not make figures of Murray Monster or Stinky as in all honesty I find those characters are quite awful! In my view it would ruin the collection if figures of those characters were made! Though that's just my humble opinion. 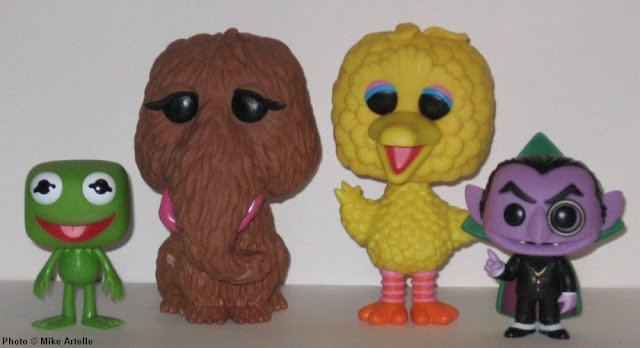 Muppets Funko Pop figures:
Kermit the Frog from The Muppets series next to Mr.Snuffleupagus, Big Bird,
and the Count from the Sesame Street series!

My previous post below has more info about all the Henson/Muppet related items that Funko has produced: https://mikeysmuppetmemorabiliamuseum.blogspot.ca/2016/11/new-jim-henson-pop-vinyl-figures-from.html#comment-form

Posted by Mikey Artelle at 6:30 PM