Back in 1995, when I was in my mid 20's, I visited the set of Sesame Street in Queens, New York which was a dream come true! While touring the set I briefly met Roscoe Orman who plays Gordon, so I thanked him for teaching me the alphabet. He sincerely replied "You're very welcome!" Then I watched as he recorded a scene with Zoe and Telly Monster. While in the studio I also met puppeteer Fran Brill who was performing Zoe Monster, and writer Annie Evans who had kindly invited me to visit the set after meeting me at a puppet conference. I also got to look inside Oscar's trash can to see where puppeteer Carol Spinney sits while performing his famous grouch. (Mr.Spinney wasn't there but I eventually met him later on in 2003.) Lifting the lid to look inside Oscar's can was something I had wanted to do since I was about three years old! I also sat on the steps at 123 Sesame Street and on a stool in Hooper's store. It was all quite surreal!!! 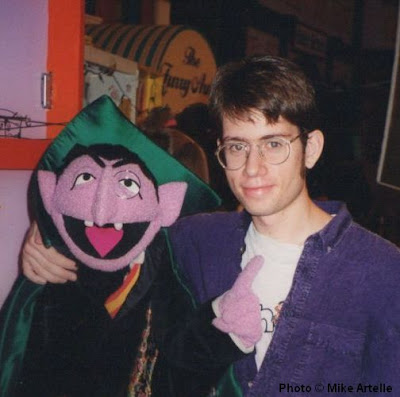 Another highlight of my visit was having my picture taken with my favourite Sesame Street character, The Count, seen above. One of the puppeteers kindly offered to help the Count strike a pose for the photo. The Count puppet was on set because puppeteer Jerry Nelson, who created the character, had been there a day or two before to record some scenes with the character. The studio's puppet wrangler had yet to put The Count puppet away, as such it was just luck that this photo happened! The Count was in a red puppet cupboard, seen in the background, which is on wheels so that it can be moved around the studio. Elmo was also in the cupboard hanging out with the Count (in fact there were two Elmo's which was really weird to see!). 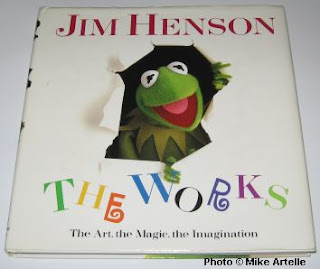 During the visit at one point I was waiting in a side room where the puppeteers rest between scenes. Several of the puppeteers who were there passed around my copy of the book "Jim Henson: The Works" and signed it for me, which was awesome!!! This included David Rudman (Baby Bear, Cookie Monster), Pam Arciero (Grundgetta Grouch), Martin Robinson (Telly, Snuffleupagus), Alice Dinnean (various supporting characters), and Bruce Connelly who drew a picture of Barkley the Dog next to his signature! Later the puppet wrangler took me to a rather tiny storage room where all the Sesame Street Muppets are kept when not needed on set. The wall on the left side of the room was covered with large wooden drawers, each with a Muppet in them! In this room I saw Harry Monster, Grundgetta Grouch (Oscar's girlfriend), several monkeys, a horse (probably Buster), and one of the  Yip Yip aliens. I wanted to live in that room forever, alas there were no drawer vacancies for humans. :) 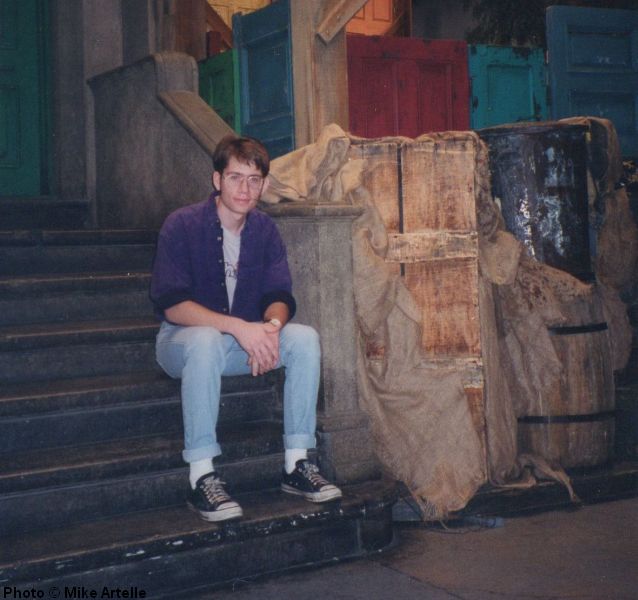 On set, sitting on the steps at 123 Sesame Street next to Oscar's trash can.

This visit took place during the time when the "around the corner from Sesame Street" set was still being used, and had been mounted as an extension of the original Sesame Street set. The addition included a hotel, a subway entrance and a park, among other locations. The entire set has since been disassembled and the original street section of the set moved to a smaller studio, which I understand is still in the same building that I had visited. At one point during my visit I had lunch in the cafeteria with puppeteers Martin Robinson and Pam Arciero. The cafeteria has a wonderful mural painted on one wall featuring Big Bird. I was so excited to be there that I couldn't concentrate enough to eat, which we all thought was quite funny! I was beaming from ear to ear the whole time! Visiting the set of Sesame Street was a wonderful experience that I'll never forget!!!

Posted by Mikey Artelle at 8:18 PM