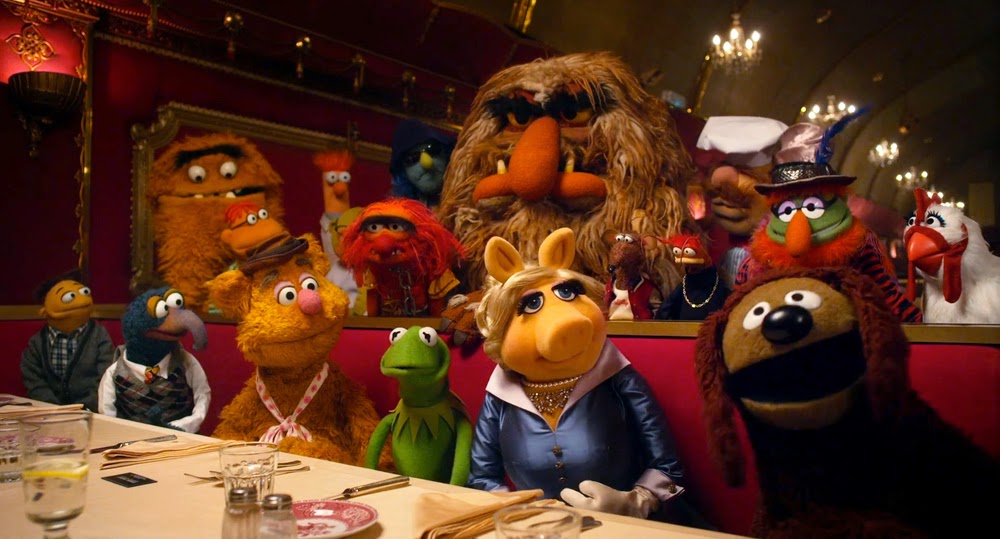 On March 21, 2014 the Muppets newest film Muppets Most Wanted arrived in theaters across North America. It likely goes without saying that my expectations for this movie were very, very high. I'm also a very picky Muppet fan too!

So how did the movie fair? Well, I do have some issues with it but for the most part I'd say that this is the best Muppet movie since their third film The Muppets Take Manhattan, when Jim Henson, Frank Oz and all of the original Muppet performers were still involved. Coming from an obsessed Muppet freak like me, this is high praise!

If you haven't seen the movie yet you might want to stop reading here as I don't want to spoil anything for you!

Things that I especially liked about this movie include the opening number "We're Making a Sequel", seeing all the original Muppet show background characters in action again (Foo Foo, Bobby Benson and his Baby Band, etc.), the absence of Jason Segel (he took up too much screen time in the 2011 movie), the helicopter scene with the Muppet Ladder (awesome!) and what Miss Piggy does to Constantine in the helicopter (hilarious!). But mostly what I liked is that the classic Muppet silliness seems to have come back into focus. (Although they were excellent films, I found Muppet Christmas Carol and Muppet Treasure Island lost that aspect of the Muppets. Muppets from Space is best left out of the conversation!)

Strange as it may seem for me to say, however, I found the movie was too long. This from the guy who watched The Muppet Show DVDs in marathon style each time a new one was released (Bye the way Disney, where are seasons Four and Five?!?!). If they had edited the film down a bit more I think it would have come off being even funnier, but as it stands I found the pacing is still off a little. This has more to do with the scenes with the human actors than those with just the Muppet performers, who I think are in top form in this film. Second, although I really liked the character of Kermit's evil double, Constantine, and found him to be very funny, I also found he got too much screen time compared to the original frog who I had actually gone to the theatre to see! That lost the movie major points in my books.

The last criticism is not necessary about the movie, but about how some of the puppets of Muppet characters have been changed. Animal, for example, now has huge bags under his eyes which I dislike completely. He had them before but never as huge as that! (See above picture). Floyd Pepper from the Electric Mayhem band, who is one of my top five favourite Muppets, now has a fabric covered bottom lip so that it's much fatter than what it used to be when it was just foam. Sam the Eagle's head is also now fabric covered rather than foam, including his beak, which I think changed the look of the "Muppet" aspect of the character too much. Seeing that they are made of foam is part of what makes the characters Muppets, in my view. That being said, as I'm a puppet maker myself I completely understand the challege of re-creating the entire cast of Muppet characters to make them look identical to their 1970s or 80s counterparts. Not only would the sewing and sculpting be a major undertaking, but finding or even creating the same type of fabrics and other materials that are needed to reproduce each character is clearly an art in itself.

All in all, definitely an awesome Muppet film that is worth seeing, and much better than the 2011 movie! 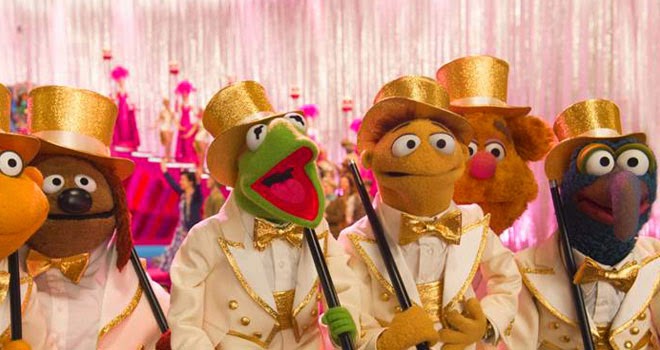