Can You Help Identify These Vintage, Mystery Sesame Figures?!? 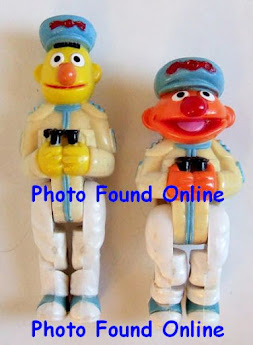 Unidentified Bert and Ernie figure with jointed hips and knees.
Lately I've been working on the Sesame Street PVC figure pages of this blog trying to identify as many of the "unknown" mystery figures that were on my list of "figures that I've seen". Many of them were sold with playsets which makes them even harder to locate and identify as there are just so many different possibilities it's like looking for a needle in a haystack! I've managed to identify many of the figures but there are two which are quite peculiar...

Above are figures of Bert and Ernie which have been popping up every so often on ebay and other websites since the early 2000's. I've never seen any information for them... who made them, when they were made, and what playset or vehicle they were sold with. It's clear by their jointed legs that they're meant to sit inside the compartment of a vehicle, and based on the outfits they're wearing with the wings on their hats, I would guess that the vehicle is an airplane. Or maybe it could be a racing car outfit? 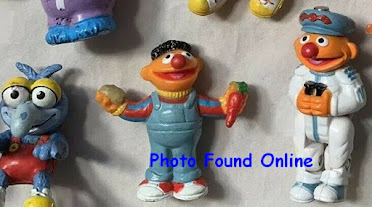 This photo shows the size of the figures are similar to an
average PVC figure, but with the addition of jointed legs.

If anyone has some information about these, I'd really appreciate if you would share it with me. A photo of the toy in the box would be amazing, though I'd just be glad to see what the vehicle looks like and what company made it. Please post the info on the discussion page of this blog, or contact me by e-mail. Hopefully this bizarre mystery can be solved!!! Many thanks!

Posted by Mikey Artelle at 4:05 AM