Muppets Most Wanted coming next month!

The new Muppet movie "Muppets Most Wanted" will be here soon! Scheduled to open March 21, 2014, it's just a little over a month away! Above is a nifty image from the Muppet Central website showing the classic Muppet gang...and Pepe, who I'm only just realizing has been hanging out with the Muppets for 20 years now. So he's technically a classic character too! (He's also either brave enough or foolish enough to hold onto Animal's chain for this picture! You'd think after 20 years he would know better.) This is a great picture of the Muppets, I like how they are all posed, It's also interesting to see Dr.Teeth with his hat off. I don't think he's ever done that before...at least not that I can recall. I'm also glad Scooter is back in with the mix. He was always one of my favourite characters. Even though his voice is completely different now, I'd rather have him as part of the gang than not. I'm not too fond of how they changed the look of Floyd Pepper though. He now has a fatter bottom lip which I think just looks weird. His voice is really well done though. 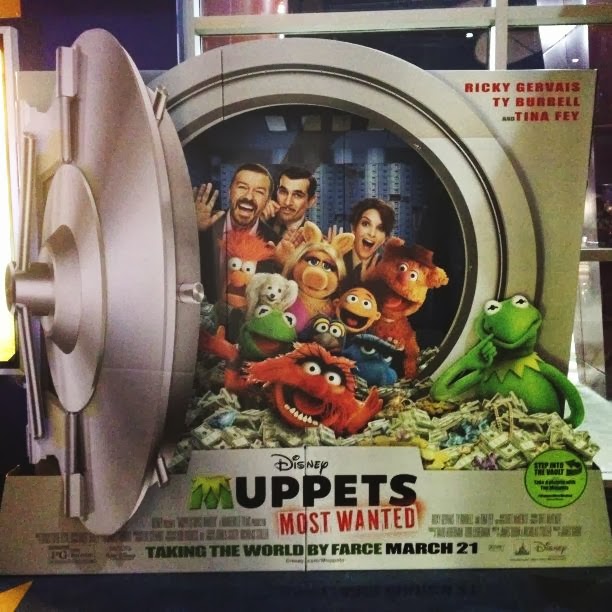 Here is a picture of the giant movie display that was at the theatre when I went to see the Lego Movie tonight (Feb12, 2014). It's made so that you can walk around the back and go inside the vault to get your picture taken with the cast, so I did! 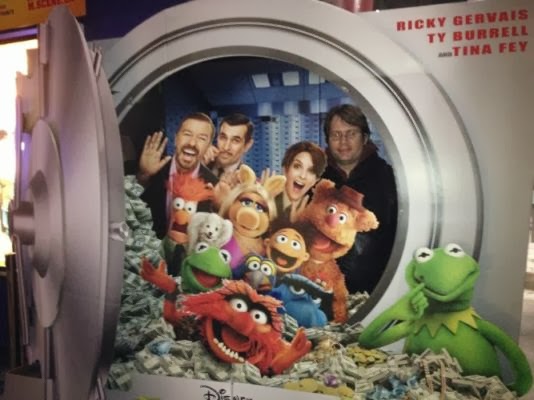 It's a good thing Scooter isn't in the picture, otherwise it would have been hard to tell which one is me. And forget about Miss Piggy, Fozzie is the real photo hog! Wocka wocka! In any case, I thought this was quite an impressive display. Disney certainly is going all out to promote the film. Just look at all the money they leave lying around. But seriously, I really do hope this is a good movie otherwise people might vault from the theatre.
Posted by Mikey Artelle at 11:40 PM