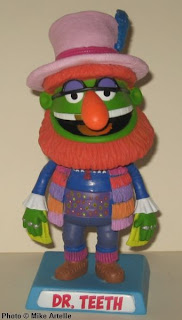 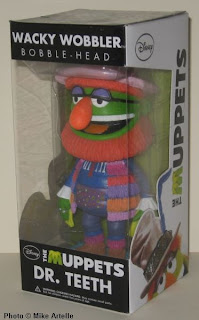 An awesome new series of Muppet Wacky Wobbler bobble heads are now available! Five Muppet characters are being made by Funko, the company that has been making bobble heads since at least 2000, if not longer. Not only are these bobble heads exremely well made, but the set includes Dr. Teeth of the Electric Mayhem Band (shown above). I've always wondered why the famous Muppet Show band members were not marketed more often, so I'm really glad to see this figure of Dr. Teeth. He's such a colourful character, and very "Muppety", which makes him very suited to being marketed. I'm hoping that a Floyd Pepper bobble head will be added to this collection someday too. In fact, bring on Zoot and Janice bobble heads also, as the whole band would look great in this Funko format. Below is a side view of Dr. Teeth and the back of the box. The other Muppets in the series are Kermit, Miss Piggy, Fozzie and Animal. 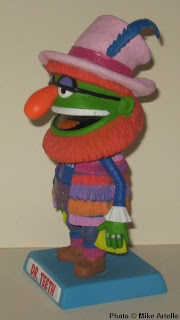 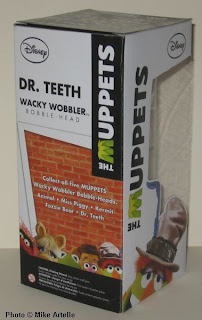 Take the Muppet Bobble Head Survey!
Just for fun, I set up a survey to see what character Muppet fans would want Funko to make as a Bobble Head. I've never done this before so I thought I'd try something new! You can answer the survey question at this link: http://www.surveymonkey.com/s/P69QYLG