Sam the Eagle has blue feet!!!

I already know that I'm obsessed with Muppets. I've known this since I was nine. But am I the only Muppet fan in the world who has noticed that Sam the Eagle's feet were incorrectly changed to yellow for the Muppets Treasure Island Movie in 1996?

The problem did not start there however. It seems that there has been confusion about the colour of Sam the Eagle's feet since the heyday of the Muppet Show in the late 1970s. This is understandable as the original puppet of Sam the Eagle did not have any feet. Below is a photo I took of a photo from page 74 of the "Of Muppets and Men" book, published in 1981. It shows Frank Oz performing Sam the Eagle, and there are no feet on the puppet. Why? Because there is no need for legs on a puppet if the puppet is only going to be seen from the waist up on camera. 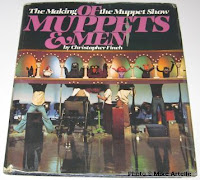 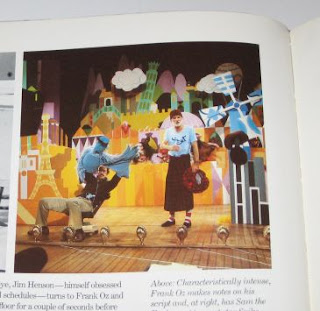 The same book shows the original sketch Jim Henson made for Sam the Eagle (page 77). The sketch is of Sam's head only, without a body, and especially without feet. I had always thought the Muppet Treasure Island was the first time Sam's feet were seen on camera, but it turns out I was wrong. The Muppet Wiki site shows a picture of Sam and his feet from the Muppet Movie (1979). Unfortunately the photo is in black and white, but the feet do not look light enough in colour to be yellow. I'll have to watch the movie again and pay closer attention. 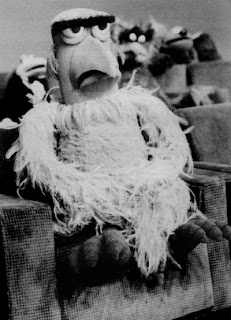 Here is the photo of Sam the Eagle from the Muppet Wiki web site found at this link:
http://muppet.wikia.com/wiki/Sam_the_Eagle 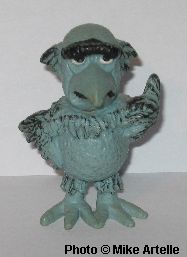 In 1979, the same year the Muppet Movie was made, the Toy company Schleigh produced PVC figures of the Muppet Show characters. Sam the Eagle was included in the collection and had blue feet, therefore leading a generation of impressionable young Muppet fans to believe Sam's feet were blue.

In 1980, Sigma produced this not-so-commonly-known-about porcelain Christmas ornament which inexplicably has yellow feet. This photo is from the Muppet Wiki site:
http://muppet.wikia.com/wiki/Muppet_Christmas_ornaments_(Sigma)

However Sam was then depicted in several Muppet Show children's books with blue feet. Okay not several...just two of them. The first one is "Robin Hood" published in 1980. The Muppet Wiki site shows a photo of him from the book (which I don't have in my collection). 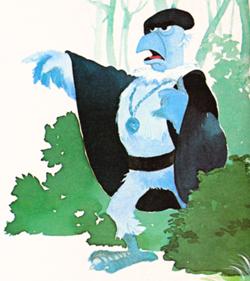 Notice his blue feet! This image is found at this Muppet Wiki link:
http://muppet.wikia.com/wiki/Sam_the_Eagle's_Alternate_Identities

The second book is called "Two for the Show" (published in 1982) and features two pictures of Sam with blue feet, shown below. 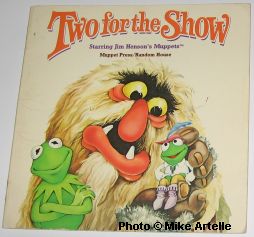 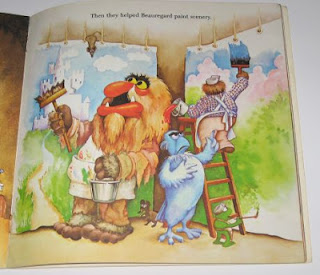 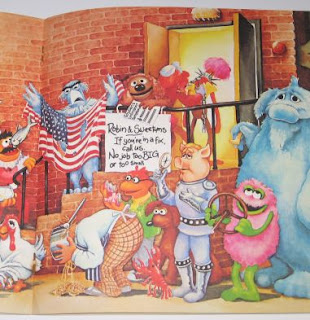 Now for those of you who are still not convinced that Sam's feet should be blue, here are some illustrations from the comic book pages of Muppet Magazine! 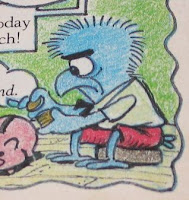 Muppet Magazine, Spring 1984, page 44...another picture of Sam with blue feet... underneath his shoes! 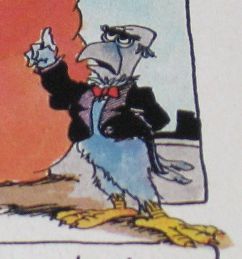 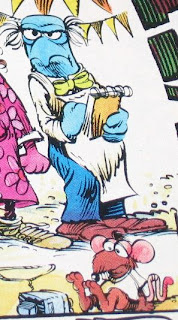 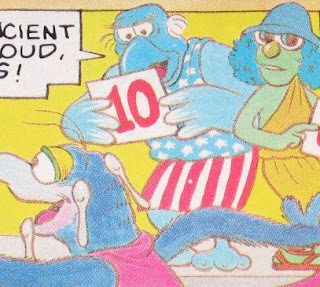 Then of course there is "The Muppet Show Book", published in 1978 before all of the above examples. This book shows Sam the Eagle on the front cover with orange chicken legs! 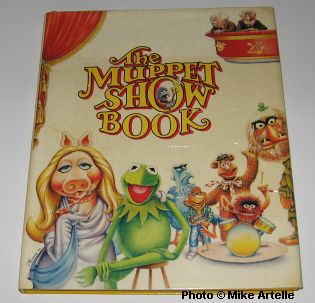 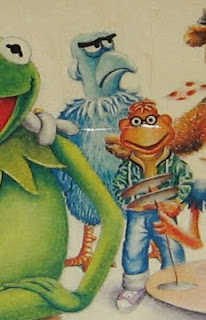 Here is a closer look at the scrawniness of Sam's chicken legs. This predates even the Muppet Movie photo showing Sam's feet and is likely the first time Sam was ever seen with feet. Mind you, in no way should this veto all of his apperances with blue feet over the years, as clearly he had blue feet more often than yellow! However....

Fast forward to Muppet Treasure Island, released in 1996, and wham-o! Sam's feet are yellow again! Not just yellow, but scrawny, tiny and yellow with little spikey claws. What were the puppet builders thinking? Could it be they used the above "Muppet Show Book" cover as reference for making Sam's feet for this shot? Didn't they do any other research to see that in fact Sam's feet should have been blue? How could they not know about the 1979 PVC figure with blue feet? The complete set of those PVC Muppet figures have been hanging from the chandelier in the foyer of the Henson Company's New York townhouse on East 69th Street since 1979! 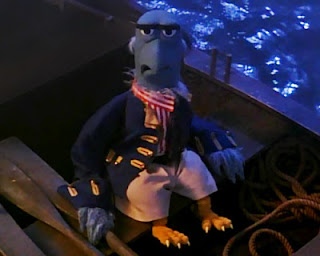 Above is the picture from the Muppet Wiki site showing Sam the Eagle's yellow feet. It is found at this link:
http://muppet.wikia.com/wiki/Sam_the_Eagle These feet look nothing like the feet Sam has in the B&W Muppet Movie photo shown at the top of this page, which I prefer. And why shouldn't Sam have blue feet? Many of his fellow Muppets have had blue feet for years with great success, such as Gonzo, Zoot, Thog, Uncle Deadly, a Big Blue Frog, Cookie Monster, Grover, Fat Blue, Boober Fraggle, Tutter and others.

I think the most important question to answer is this: Why didn't the puppet builders know that blue beak = blue feet? Camilla has an orange beak and her feet are orange. And there's also Big Bird. His beak is yellow and his legs...um...let's not bring Big Bird into this, he's from a separate franchise!

None the less, I have further evidence that Sam's feet are supposed to be blue! For here, I present another children's book based on the very same movie from whence the yellow feet appeared. "Muppet Treasure Island: Treasure Hunt" (1996) shows the following picture of Sam, not with yellow feet, but with blue feet!!!! 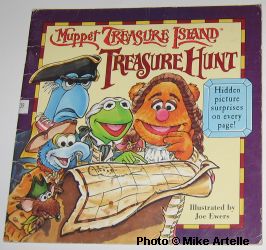 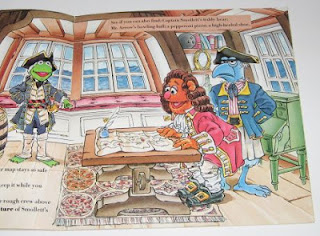 And why did the artist colour Sam's feet blue? Not because of some error. Clearly, because it makes sense to colour them blue! And who wouldn't agree that they look more American in blue? (I'm Canadian so I'm really just guessing about that last part, but I suspect that would be Sam's opinion.)

Unfortunately, it seems the blue feet only momentarily prevailed as from this point on the yellow feet caught on with toy manufacturers. And wouldn't you know it, now that the Muppets are back in vogue and collectable as ever, new action figures and toys are popping up everywhere. Sam has been made in plush form for the first time, and as an action figure for the first time, and several other times! Take a look below at some of the cool Sam the Eagle offerings of recent years, all of which have yellow feet!!! 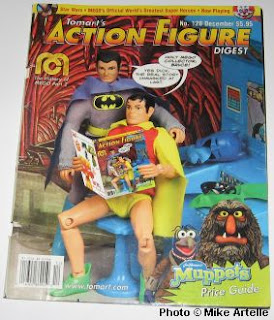 This Tomart's Action Figure Digest magazine ( No. 128, Dec 2004) has a section about the Muppet Show action figures by Palisades. Below are some photos from inside the magazine showing the Sam the Eagle figures. In some cases his feet aren't visible but they are yellow. 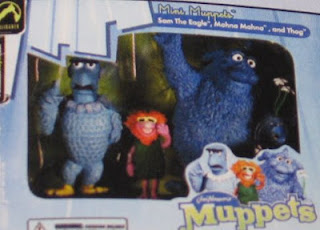 This one is a PVC figure. 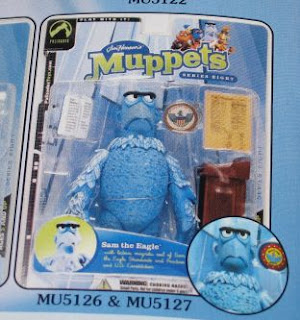 These two, above and below, are articulated action figures with yellow feet. 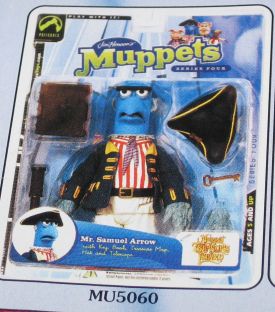 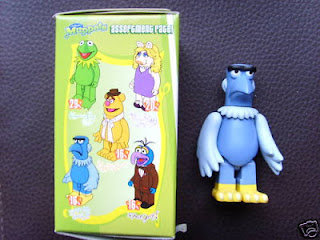 This is a Kubrick figure. I found the image at this website:
http://www.toplessrobot.com/2010/02/the_21_greatest_medicom_kubrick_figures.php 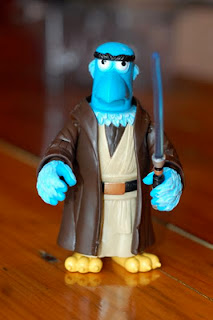 This is the Star Wars Muppets action figure of Sam the Eagle as Obi-Wan Kenobi available only at Disney theme parks in 2011. I found this photo at the this link:
http://disneyatdisleelandiablog.blogspot.ca/2012/01/star-wars-muppet-action-figure.html 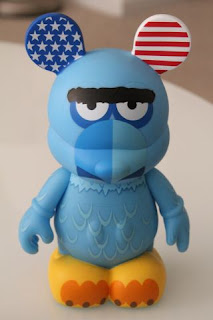 This is a Disney Muppets Vinylmation action figure. I found this image at this site:
http://thedisblog.wordpress.com/2011/06/28/full-look-at-muppets-sam-the-eagle-9-vinylmation/ 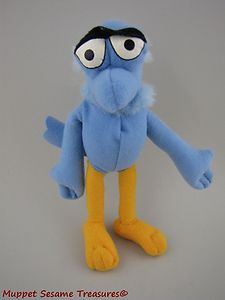 This is quite possibly the first ever Sam the Eagle plush toy. The photo is from an e-bay auction:
http://www.ebay.com/itm/RARE-Muppet-SAM-EAGLE-PLUSH-STUFFED-DOLL-Small-6-McDonalds-Premium-2002-/370632631638

And so, fellow Muppet collectors, I submit that all of these collectables have been ruined. Ruined I say! All because of the yellow feet. Alas, how many more Sam the Eagle action figures and stuffed toys must be ruined in this way? Have the Muppet puppet builders no shame? End the confusion! Correct this travesty before it gets any further out of hand. Replace Sam the Eagle's yellow feet with the blue feet he was always meant to have! Someone get Frank Oz on the phone!!!
Posted by Mikey Artelle at 8:58 PM