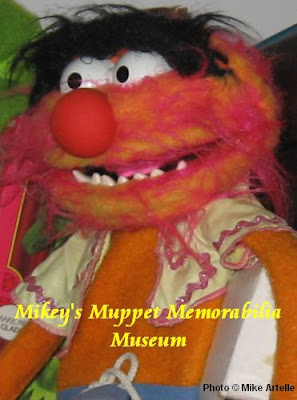 My all-time favourite Muppet collectable is the Fisher-Price Animal Muppet made between 1976 -1979. Although I had watched Sesame Street, The Muppet Show and owned several toy Muppet puppets (Big Bird, Kermit, Miss Piggy) it was the Animal puppet that got me hooked on collecting Muppet memorabilia! I wanted one of these soooooo badly when I was a kid, but by the time I had convinced my parents of its importance to my well being (and that it was worth the cost - this was an expensive toy in the late 70's!), Fisher-Price had stopped producing their Muppet show series of toys. Thus, the hunt began, and over many years I searched flea-markets and garage sales to no avail, (there was no e-bay back then, or an Internet...or computers!) until one day when I was 16 I got one as a gift from a high school friend who knew how obsessed I was about the Muppets. At last! Ironically, it was the last character I needed to complete the Fisher-Price series of plush puppets and dolls, as in my search for the Animal puppet I had collected all the others in the set!

I've added a few items to "Other Henson Worlds" and the "Muppets" pages...take a look! :)
Posted by Mikey Artelle at 4:42 PM